What are fish oil supplements? 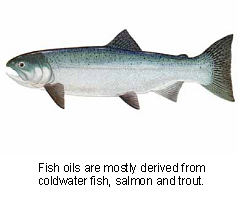 Most commercially available fish oils are derived from coldwater fish, primarily menhaden, but also salmon and trout.  These oils are rich in the Omega-3 fatty acids eicosapentaenoic acid (EPA) and docosahexaenoic acid (DHA).

"...have a significant moderating influence on inflammation."

These two fatty acids are metabolized to series 3 prostaglandins, which can have a significant moderating influence on inflammation. Fish, in turn, obtain EPA and DHA from algae, making super green foods such as marine micro-algae an alternate source of EPA and DHA. Algae may become the dominant source of omega-3 fatty acids as fish populations continue to decline in the world's oceans.

Why recommend administration of fish oil to my pet?

Fish oil supplementation may be helpful for pets with inflammatory diseases including allergies, arthritis, kidney disease, heart disease, and many types of cancer. The EPA and DHA in fish oil are converted into series 3 prostaglandins which, like series 1, reduce the tendency to inflammation. Series 2 prostaglandins promote inflammation and are synthesized from the omega-6 fatty acid known as arachidonic acid, commonly found in animal fat. The higher the ratio of omega-3 fatty acids to arachidonic acid in the diet, the less prone an animal will theoretically be to developing inflammatory disorders - hence the recent interest in omega-3 to omega-6 fatty acid RATIOS in human nutrition. Unfortunately, commercial dog foods tend to be very low in omega-3 fatty acid content, predisposing them to inflammatory conditions. Some manufacturers have recently begun to rectify this situation. 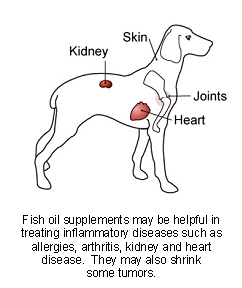 In humans, arthritis, Crohn's disease, ulcerative colitis and systemic lupus erythematosis are autoimmune diseases characterized by a high level of the proinflammatory leukotriene LTB(4) produced from omega-6 fatty acids. There have been a number of clinical trials assessing the benefits of dietary supplementation with fish oils in several inflammatory and autoimmune diseases in humans, including rheumatoid arthritis, Crohn's disease, ulcerative colitis, psoriasis, lupus erythematosus, multiple sclerosis and migraine headaches. Many of the placebo-controlled trials of fish oil in chronic inflammatory diseases reveal significant benefit, resulting in decreased disease activity and even a reduced need for anti-inflammatory drugs.

Omega-3 fatty acids found in fish oils also have other effects unrelated to their effects on controlling inflammation. For example, poly-unsaturated fatty acids (PUFA) including fish oil may help reduce the tendency to cardiac arrhythmias (heart rhythm abnormalities) and seizures. A calming effect of EPA in particular has also been noted in the management of schizophrenia, to the point of reducing the need for anti-psychotic drug use, and improving mental function in those patients who are still receiving pharmaceutical treatment.

"Another interesting effect of fish oil is its ability to inhibit tumor growth."

Another interesting effect of fish oil is its ability to inhibit tumor growth. DHA shrinks tumors by promoting cell differentiation. As neoplastic or cancer cells differentiate or age, their lifespans become predetermined and limits are placed on how many more times an individual cell can divide. The ability of fish oil to inhibit cell proliferation has also excited tremendous interest in its use as a supplement in patients prone to coronary artery disease. The first step in the formation of an atheromatous plaque that may occlude a coronary artery is smooth muscle cell proliferation within the vessel wall. Fish oil supplementation has shown a marked ability to inhibit this step in many studies.

How much experience is there with the use of fish oil in pets?

"Fish oil supplements are considered to be a "mainstream" or conventional medication..."

Fish oil supplements are among the most commonly used supplements in all of veterinary medicine, to the point that they are considered to be a "mainstream" or conventional medication rather than an alternative treatment. As a result, there is a large amount of clinical experience using fish oil in dogs and cats, especially in the treatment of allergies. Other emerging indications and uses include:

Pets with any type of inflammatory disease may benefit from fish oil supplementation. In general, more severe disease requires doses higher than those commonly recommended.  In severe inflammatory diseases, fish oil will not suffice on its own, but may augment the effects of other therapeutics.

How successful is fish oil?

Fish oil is readily absorbed as a dietary supplement. After one week of supplementation, increases in omega-3 fatty acids are detectable in the tissues. Tissue elevations in EPA and DHA persist for as long as one to two months after supplementation is discontinued.

Fish oil is very effective in some pets with allergic skin disease. The response is variable in other diseases (such as inflammatory kidney disease). In pets with some types of cancer, fish oil appears to slow down the growth of the cancer. While more studies are needed on other types of cancer, the general recommendation is to add fish oil to the diets of all pets with cancer.

How safe is fish oil?

While the temptation has existed to give fish oil supplements to all animals with inflammatory disorders, the reality is that some animals will respond better than others. Many will not appear to improve at all. Interestingly, Traditional Chinese Medicine gives us a reliable indicator of when essential fatty acid supplementation may be clinically helpful. Those animals diagnosed with Blood or Yin Deficiency tend to respond much better than those animals diagnosed as having a Dampness Accumulation.

From a conventional medical perspective, some animals will tend to develop oily coats and large flakes of dander following omega-3 fatty acid supplementation. This condition, known as seborrhea oleosa, resolves within one to two weeks of discontinuing the supplement.

"The most common side effect is a fishy odor to the breath or the skin."

Fish oil supplementation is otherwise very safe at recommended doses. The most common side effect is a fishy odor to the breath or the skin. Omega-3 EFAs may inhibit platelet aggregation (platelets are cells that help in the clotting process) accounting for some clinicians to recommend not using them when other anticoagulant (anti-clotting) medications are used. Fish oil does not seem to cause bleeding problems when it is taken by itself at commonly recommended dosages. Fish oil also does not appear to raise blood sugar levels in people or pets with diabetes, contrary to earlier reports.

Where do I obtain fish oil and do I need a prescription?

Pet owners are cautioned against buying supplements without knowledge of the manufacturer, as supplements vary widely in their content of the various omega-3 fatty acids. In addition, products containing omega fatty acids are very susceptible to rancidity if packaged or stored incorrectly. A prescription is not needed for fish oil.  Your veterinarian may have preferred brands of supplements that he or she will recommend.