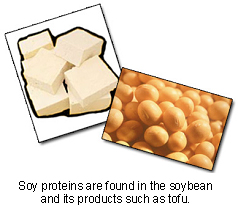 Soy proteins are the proteins found in the soybean and its products such as tofu. Isoflavones are a particularly important class of soy protein, and include the water-soluble compounds genistein and daidzein. Genistein is found in other plants as well, including red clover, and is one of the most heavily studied plant compounds in the world, because of its phytoestrogenic effects.

Phytoestrogens, or estrogens found naturally in plants, are of particular interest in menopausal women as a safe form of estrogen replacement therapy. Clinical trials have demonstrated a mild ability of genistein to relieve hot flashes, but a significant ability of soy isoflavones to inhibit bone loss in women diagnosed with osteoporosis.

Why recommend administration of soy proteins/isoflavones to my pet?

"The potential application of soy protein to the treatment of small animal disorders is very speculative..."

One of the most consistently acknowledged effects of soy isoflavones in humans is in the correction of hyperlipidemia, high cholesterol, and high LDL cholesterol. Soy isoflavones should thus be investigated for the treatment of conditions associated with hyperlipidemia and elevated cholesterol in dogs, including glomerulonephritis (inflammation of the kidney). Soy extracts have shown a protective effect against renal disease in both animals and humans.

Several studies have demonstrated a reduced incidence of estrogen sensitive tumors in countries consuming abundant soy products. Estrogen sensitive tumors include breast cancer and prostate cancer. Research on the application of genistein to these and other tumors, such as colon cancer and squamous cell carcinoma is generally encouraging, although some studies showed a lack of effect, or even a tendency for genistein to stimulate tumor growth in estrogen sensitive tissues in rats. The overall positive results led to the development of an antibody-tagged version of genistein which exhibits significant efficacy against human lymphoma and leukemia cells. No similar products for the treatment of lymphoma in animals have yet been developed. 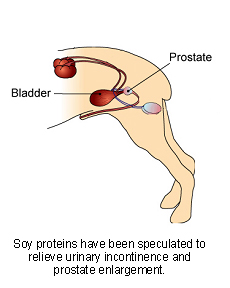 Soy proteins have been speculated to potentially aid the treatment of estrogen-sensitive conditions in small animals, including benign prostatic hypertrophy (benign enlargement of the prostate gland) and hormonally responsive urinary incontinence.

"...anecdotal success of soy isoflavones in the treatment of canine urinary incontinence..."

Formal trials have not been conducted, but anecdotal success of soy isoflavones in the treatment of canine urinary incontinence has been reported.

Another important potential application of soy proteins in small animal medicine is in the treatment of conditions associated with insulin resistance, including type II diabetes mellitus. Soy isoflavones have been shown to have a significant effect in improving insulin sensitivity in diabetic patients.

How successful is treatment with soy proteins/isoflavones?

Soy proteins/isoflavones appear to be beneficial in lowering blood cholesterol and in decreasing urinary incontinence in some pets. They may also help in the treatment of cancer.

How safe are soy proteins/isoflavones?

Soy proteins/isoflavones appear safe. As mentioned, isoflavones have estrogen-like activity but there have been no reports of toxicity associated with short or long term consumption of soy protein. No adverse effects on fertility have been demonstrated in human males consuming significant quantities of soy protein. Some studies suggest genistein may enhance the development of some tumors, particularly in estrogen sensitive organs in laboratory animals. More research is required in this area.

Despite the favorable experiences of some practitioners in using soy proteins to treat hormonally responsive urinary incontinence in dogs, some studies suggest soy isoflavones may have an opposite effect.

Where do I obtain soy proteins/isoflavones and do I need a prescription?

Soy isoflavones are readily absorbed from the digestive tract, and may already be present in animals fed soy-based foods. Significant variation in serum isoflavone levels exists depending on the brand of food used. If soy isoflavones are to be used therapeutically, additional supplementation is probably recommended. Your veterinarian may have preferred brands of supplements that he or she will recommend. Pet owners are cautioned against buying supplements without knowledge of the manufacturer, as supplements are not highly regulated and some supplements may not contain the labeled amount of ingredients. A prescription is not needed for soy proteins or isoflavones.