What is St. John's Wort? 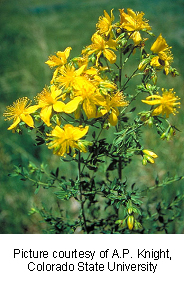 St. John's Wort is an herb prepared from the plant Hypericum perforatum. Currently, it is mainly used for treating depression and anxiety disorders in people. This is a fairly modern use of St. John's Wort.

"Traditionally, the herb was used to ease the pain of peripheral nerve injuries."

Traditionally, the herb was used to ease the pain of peripheral nerve injuries.

Why recommend administration of St. John's Wort to my pet?

While St. John's Wort is typically thought of as promoting human mental health, research indicates that the herb is also anxiolytic (reduces anxiety) in some animal species. In addition, the herb is effective in laboratory animals at reducing depression and psychological stress. Because of these relaxant effects, some practitioners prescribe St. John's Wort for mild anxiety associated with thunderstorms, visits to the groomer or veterinarian, and other mild fears and phobias. 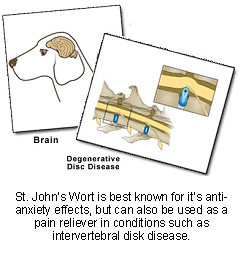 Scientists have identified a chemical basis for the herb's ability to relieve pain, namely a mechanism similar to opiates, which are in the same chemical class as morphine. Hypericum finds use as an analgesic in the management of intervertebral disk disease. Topical application of the essential oil prepared from St. John's Wort may help with mild contusions, muscle aches, and minor skin irritations.

An effect of hypericum unrelated to the nervous system is its activity against lentiviruses, including FIV (Feline Immune Deficiency Virus) and perhaps even feline leukemia virus. Clinical experience with hypericum in the management of feline leukemia suggests it is effective, and has a role in the integrated management of this condition.

How much experience is there with the use of St. John's Wort in pets?

Despite the therapeutic possibilities discussed above, experience with St. John's Wort in pets is still limited. Doctors who have used it by itself or in herbal preparations report positive results. It is a leading prescription remedy for depression in people in Europe.

What species of animals are being treated regularly with St. John's Wort?

Dogs and cats are treated with St. John's Wort.

While a significant amount of research has been conducted on the effects of St. John's Wort in people and laboratory animals, research in pet animals is lacking.

How can my pet benefit from St. John's Wort?

Pets with mild anxiety, phobic conditions, or depression may benefit. Feline hyperesthesia syndrome (also known as "rolling skin disease"), a convulsive disorder of cats, appears amenable to treatment with serotonin reuptake inhibitors, and may benefit from the serotonin-raising effects of St. John's Wort. Feline hyperesthesia can also be considered a severe form of peripheral neuralgia, which was a traditional indication for St. John's Wort. Psychogenic alopecia (hair loss resulting from psychological reasons) in both dogs and cats and even acral lick dermatitis in dogs (also called lick granuloma) might similarly benefit, given the herb's relaxant and peripheral analgesic (pain relieving) effects. Hypericum may also be used to relieve acute back pain secondary to disk prolapse. Hypericum appears to be effective in the treatment of feline immune deficiency viruses, although these benefits are probably only seen with the use of liquid extracts.

How safe is St. John's Wort?

St. John's Wort appears quite safe for use in dogs and cats.

"Photosensitization (sensitivity to sunlight) is possible with extended use of high doses."

Photosensitization (sensitivity to sunlight) is possible with extended use of high doses. Animal and human research has indicated that photosensitization is not likely to occur at the dosages typically used. 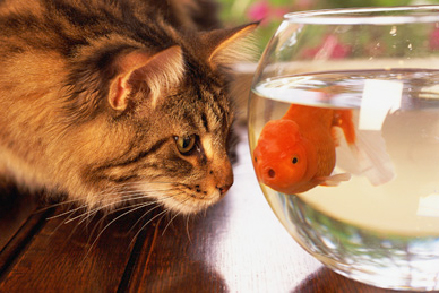 Finally, preliminary reports from the University of Colorado suggest that St. John's Wort may interfere with the action of the anti-tumor drugs etoposide (VePesid), teniposide (Vumon), mitoxantrone (Novantrone), and doxorubicin (Adriamycin). More research is needed in these areas.

"Safety in young children, pregnant or nursing women, or those with severe liver or kidney disease has not been established."

Safety in young children, pregnant or nursing women, or those with severe liver or kidney disease has not been established. Similar precautions in pets are warranted.

Where do I obtain St. John's Wort and do I need a prescription?

Pet owners are cautioned against buying supplements without knowledge of the manufacturer, as supplements are not highly regulated and some supplements may not contain the labelled amount of ingredients. Your veterinarian may have preferred brands or formulations of St. John's Wort that he or she will recommend. Liquid extracts should be used for the management of immune deficiency syndromes. A prescription is not needed for St. John's Wort.