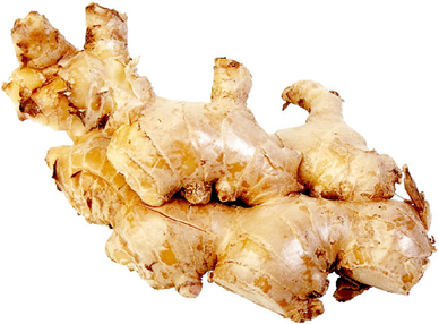 Ginger is a well-known tropical herb whose root is used in both Traditional Chinese Medicine and Western Herbal Medicine.  The fresh root may be used, or it may be prepared as a tincture, powder, tablet, or tea. In many cases, clinical effects with alcohol extracts are superior to results achieved with teas and powders.

Why recommend administration of ginger to my pet?

The most well-known medical use of ginger is as an anti-emetic (prevention of nausea and vomiting). Indeed, in Chinese medicine, ginger is consumed as a stomachic, to help support digestion and normalize gastric function. Several placebo-controlled randomized studies have shown ginger to be safe and effective in the relief of nausea associated with pregnancy. Alcohol extracts were shown effective in preventing vomiting in dogs receiving cisplatin chemotherapy. 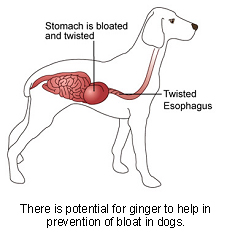 One potential use for ginger in small animals is in the relief or prevention of gastric dilatation and volvulus (GDV or bloat) in dogs. Despite its efficacy in preventing vomiting, ginger has been shown to stimulate stomach motility and accelerate stomach emptying time in multiple studies.

Another interesting potential application of ginger is in the treatment of canine heartworm disease. In a 1987 study, microfilarial loads were reduced between 83 and 98 percent by 12 subcutaneous injections of an alcohol extract of ginger. Side effects of treatment were minimal to absent.

Other milder effects of ginger are also utilized in practice. Some holistic practitioners incorporate it into the therapy for pets with heart disease due to the cardiotonic and anti-clotting effects which have been suggested in a limited number of laboratory animal studies. Products for the treatment of osteoarthritis in dogs have been recently released utilizing ginger extracts as their main component. Clinical trials in dogs have not been reported in the literature. Effects of ginger in human osteoarthritis are mild to moderate and not clinically significant when compared with drugs such as ibuprofen.

No studies on the effects of ginger in cats have been conducted.

How much experience is there with the use of ginger in pets?

Ginger has been used for many years in pets in the treatment of vomiting and cardiovascular disorders. Dogs and cats are the species most often treated. Its use may be expanded to the treatment of bloat (GDV) in dogs.

How safe is ginger?

Ginger has a long track record of safety, given its longstanding use as a foodstuff and herbal medicine in humans.

"The chief adverse effect of ginger is mild gastrointestinal irritation."

The chief adverse effect of ginger is mild gastrointestinal irritation. This may be more readily seen in cats than dogs. Traditional herbal medicine never used ginger alone, but always as a component of a wide variety of formulas. Cats tolerate ginger extremely well when given as a small component of an appropriate herbal formula.

Where do I obtain ginger and do I need a prescription?

Pet owners are cautioned against buying supplements without knowledge of the manufacturer, as supplements are not highly regulated and some supplements may not contain the labelled amount of ingredient. A prescription is not needed for ginger. Ginger may be better tolerated and its effects synergistically enhanced when used as a component of a larger herbal formula. Your veterinarian may have preferred brands or combinations of supplements that he or she will recommend. Expert advice is often needed to select the formula most appropriate for a patient.